Dedication of the Bishop Kemper School for Ministry:
October 5, 2013

The Most Rev. Katharine Jefferts Schori
Presiding Bishop and Primate
The Episcopal Church 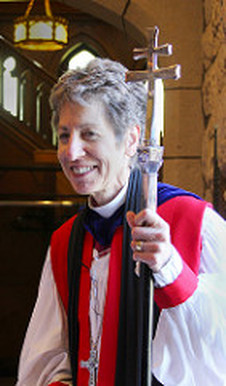 Congratulations on this initiative – the Bishop Kemper School is a remarkable thing to celebrate! You are building on the foundation laid by others years ago. You heard Paul’s reminder: we’re all God’s servants, working together… and you are God’s building. Skilled builders laid the foundation, and later workers are building on it. You’re continuing in the work that Jackson Kemper started here – he would be amazed and deeply grateful to see what has resulted!

Jackson Kemper was born on Christmas Eve of 1789 in Pleasant Valley, NY, in the same year The Episcopal Church was formally established. He attended Columbia College and was ordained priest in 1814. In 1835, when the General Convention first claimed that all of us are members of the Domestic and Foreign Missionary Society, they also chose Kemper to be the first missionary bishop, to serve “the Northwest.” His first charge was to serve Indiana and Missouri, and three years later Iowa, Wisconsin, and Indian Territory were added, including everything west of Iowa. Later he expanded the work into Minnesota, Kansas, and Nebraska, eventually being affectionately known as “bishop of all outdoors.” He laid the foundations for what are today a dozen dioceses.

He found it challenging – nigh on impossible – to get the settled eastern clergy to come west in the Lord’s service. There weren’t many “stars from the east” shining in these parts. So he started Kemper College in St. Louis to train people (men) who were familiar with the challenges of living and traveling on the frontier. He needed leaders who knew the local context and what the English reformers called the “language understanded of the people.” Financial challenges meant that Kemper College didn’t last, but a foundation was laid for the contextually appropriate formation of church leaders.

Kemper later founded Nashotah House, with similar aims, and then Racine College, which later became the DeKoven Foundation. Sometimes the foundation leads to other and unexpected possibilities.

Kemper was also responsible for a significant expansion in the Episcopal Church’s ministry with Native Americans, and it was he who ordained Enmegabowh deacon in 1859. He was the first Native person to be ordained priest in this church. Kemper laid the foundation for indigenous clergy leadership for all sorts and conditions of communities.

In 1841 Kemper went back to New York to report to the Board of Missions about his work. In his sermon he alluded to the same great parables Paul invokes in his letter to the Corinthians: “Let the leaven spread, the grain of mustard grow – the net be cast into the deepest waters. God will give the increase. It is for us to plant and water.”[1] He continued to challenge the whole of the church and its leaders to remember Jesus’ charge to go and make disciples in every context:
In the report given at his resignation as bishop of all outdoors, Kemper sounded notes that would be very familiar: lack of funding for these missionary efforts, and the large and growing populations which weren’t being adequately served. Noting a lively and packed service celebrated in the Oneida language where he confirmed more than a dozen, he asked, “why shouldn’t there be a hundred similar congregations” serving the native peoples of this land? And then he asked who would go to serve the people of Pike’s Peak district (Colorado) as well as Dakota, New Mexico, and Deseret (Utah)?

The foundational work of our first missionary bishop was going out to meet people in vastly differing contexts, impelled by the enduring vision of a community gathered from every family, language, tribe, and nation, drawn into Jesus’ fellowship and God’s presence.[2]

The challenge today is the same. How do we send out leaders, lay and ordained, to serve the world around us, a world deeply hungry for good news? The proportion of the population that claims to be SBNR (spiritual but not religious) or None (no religious affiliation) is growing rapidly, among younger generations as well as their elders: 1 in 6 adult Americans today, and higher in younger cohorts. The hunger for meaning, connection, and hope is there in abundance – the hunger is there, and the only question is whether there are laborers enough for the harvest. Those who go out into the fields will find their own hungers answered as well.

The young adults outside our doors are deeply committed to transformation of the injustice, pain, and poverty they see around them. They don’t always have much patience for moldy institutions – and neither does Jesus, I dare say! The building that is the body of Christ is continually dying and rising to new life in order that it might serve the ever-expanding and changing variety of God’s creation. The very facilities that house this center of formation are building on older foundations. The College of the Companions of Sts. Mary and Martha of Bethany opened here in 1860 as a school for young frontier women. Together with the heritage of Kemper College, this school will continue to serve new populations on today’s frontiers. This school is building on the foundations of diocesan schools, and the new chapel will quite literally be raised on the ashes of saints who have walked among us here.

The task of this new Kemper School is to form leaders who can share good news in farm towns and prairie villages, in university halls and beer halls, on soccer fields and factory floors, in government offices and laundromats. Like the saint whose name it bears, this community will form and send leaders to all outdoors – out these doors into the distant reaches of this earthly neighborhood, bearing hope and the promise of new life for all who yearn for its possibility. May God bless the going and the sending, and the building – building up the body of Christ and the body of God’s creation.