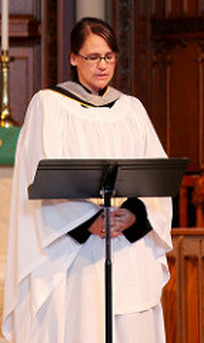 I have been thinking a lot about preparation. In particular, preparation for a move. As many of you know, Craig and Mari and I are in the midst of moving from our home in Lawrence to a new home in Omaha. We are sorting, and purging, and packing. We are selling a house, buying another; finding a new preschool, a new bank, a new doctor; slowly internalizing a new map. We are preparing. We are preparing as best we can for the endless list that is made up of both things we know we’ll face and things we can only wonder about, or hope for, or fear.

That’s the thing about this particular kind of preparation. That’s the thing about moving. It isn’t the work of getting stuff in boxes, getting the boxes from one place to another, or even the labyrinthine task of finding a new set of four walls to call home that can be so overwhelming. What is exciting and strange and fearsome about preparing for a move is that—in ways big and small—you are presented with the chance and the burden to make a new life. You are presented again and again with the question—as you ask yourself and each other how much house you really need; as you choose this neighborhood over that one; as you imagine life closer to some of those you love and further away from others—who are you? Where and how do you choose to live your life? In what direction are you moving? It is this set of questions that makes preparing for a move so much more complicated and fraught with meaning than simply picking yourself up from one spot and landing in another.

It is this same set of unnerving questions that hang over the people of Israel in tonight’s reading from Isaiah. “Declare and present your case,” God demands through the prophet: who are you? And in what direction are you moving? These words come in the middle of the book of Isaiah, in a section scholars refer to as Second Isaiah. Here, the prophet addresses Israel not in its heyday, during the good six hundred years after its conquest of Canaan, when the Israelites lived mostly peacefully and securely in what they understood to be their divinely promised homeland.

Rather, Second Isaiah’s message is given to an Israel living outside its homeland; to an Israel that had suffered the slaughter and starvation of siege warfare at the hands of an invading army, that had watched its beloved Jerusalem burn, that had seen its temple—God’s home on earth—torn to the ground. The destruction brought on Israel by the juggernaut Babylon is remembered in the book of Lamentations as utterly incomparable, the ruin as vast as the sea. It is from this Israel—made up of exiles who had spent the last fifty years living away from home—that Second Isaiah wants answers.

And why? Because, as Second Isaiah cajoles his listeners again and again, it is time to move. “A voice cries out,” he says elsewhere in his message to Israel, “‘In the wilderness prepare the way of the Lord, make straight in the desert a highway for our God. Every valley shall be lifted up, and every mountain and hill be made low; the uneven ground shall become level, and the rough places a plain.’” It is time to call the moving van, folks . . . to pull together whatever scant belongings you’ve collected for yourselves in exile; to prepare for the eight-hundred-mile trek from Babylon back to the restored Israel; and all the while to ask yourselves, who are you? Where and how do you choose to live your life? In what direction are you moving?

Because for this Israel, it would have been easier to stay. This Israel had spent half a century living and dying and being born in Babylon; they were, surely, used to the place. And yet Second Isaiah demands that they prepare to move half the known world away, and in preparing to do so to answer those unsettling questions: who are we? We are God’s people. And in what direction are we moving? We are moving—however impossibly hard it will be—to the home promised us by our God.

The good news offered by Second Isaiah in our passage for today is that Israel won’t make this move alone. “I am the Lord, there is no other god besides me, a righteous God and Savoir,” God declares in Isaiah. “For I am God, and there is no other!” This is God’s steady refrain throughout Second Isaiah—God is God alone and God is with God’s people. As they prepare to move, God is with them, making what was the treacherous path on which they were once drug into exile now an easily trod, well-watered way home.

And that is good news for us, too. We are gathered here this weekend because you are preparing for a move of a different sort. You are winding your way through the territory of theological education, and, perhaps like your ancient Israelite brethren, at some stages reluctantly and without a sure sense of direction. You have prepared for your move by talking with mentors, meeting with discernment committees and psychologists, interviewing with the Commission on Ministry, sitting in the bishop’s office, and, now that the school year has started, dutifully and eagerly studying for your BKSM courses. You are packing the boxes.

And yet, still, that’s the easy part of preparing for the move. The harder part of your move, as with all moves, is that through it you are making a new life. And the unanswered questions abound: what does it mean to be called? How do I balance school and work? What will it be like to be a clergy family? What if I don’t make it through the process? What if I do? Where will I serve? And, those most fearsome and hopeful questions: who am I? And in what direction am I moving?

These questions will hang over you. That is what it means to move. But the promise of Second Isaiah is this: whatever the course of formation throws at you, however high the mountains tower, or however low the valleys dip, the Lord has called you to this life; the Lord walks with you; and the Lord will make your pathway straight.