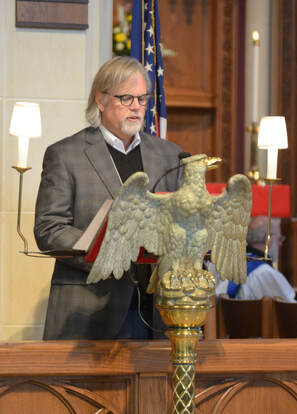 February Overview
Christian Theology I (D)
This course provides a biblical, historical, and systematic overview of the following Christian concepts: Revelation, the Bible, God, Creation, Humanity and Sin. The goal of this course is to provide students enrolled on the diaconal track (as well as lay students interested in personal enrichment) with a theological foundation for effective ministry in the world today.
Book List              Your Instructor  Forms of Christian Ethics (P)
Throughout Christian history, Christian ethics has come in many forms, rooted in different historical circumstances, cultural milieus, and theological traditions.  With the goal of appreciating and applying this diversity, this course will explore the forms of Christian ethics through two different lenses: 1) goals, duties, and virtues as developed by Robin Lovin;  2)  universal, subversive, and ecclesial ethics as developed by Samuel Wells.

With these two categorical lenses, the class will discuss and analyze the perspectives of several different thinkers within the history of Christian ethics, including Augustine, Thomas Aquinas, John Calvin, Martin Luther, John Wesley, William Temple, Karl Barth, Dietrich Bonhoeffer, Reinhold Niebuhr, H. Richard Niebuhr, Stanley Hauerwas, and James Gustafson. The ultimate goal is for these various thinkers and the various forms that Christian ethics can take to become tools which can be used in our 21st century context.﻿
Book List              Your Instructor
Social Ministry I
This course will explore the Biblical, theological, and historical foundations of social ministry in an Episcopal/Anglican context. Participants will also gain a basic understanding of  contemporary issues related to poverty in our communities such as, but not limited to, hunger, education, senior citizens, housing, mental health, refugee resettlement, and other issues which  push persons to the margins of society.
Book List Your Instructors
Register for February Courses