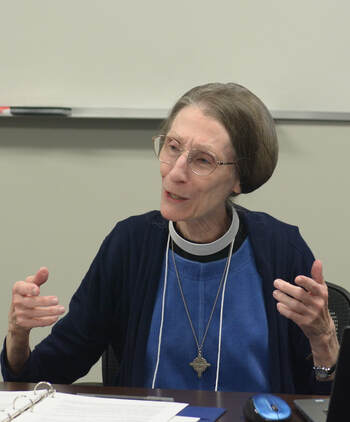 December Overview
Diakonia I
This course is intended for those on the path toward ordination to the diaconate in order to help you to develop an understanding of the diaconate in the Church in general, and the Episcopal Church in particular.  Specifically, this course examines the history, evolution and theology of the diaconate from the time of the first-century church to the present. The class also emphasizes the roles of the deacon in the Sacraments of the Church, especially the deacon’s role in the Eucharist, as well as the call of the deacon to ministry in the world, particularly the poor, the weak, the sick, and the lonely.
Book List              Your Instructor

Foundations of Ethics
Christian Ethics is a field of study in which theological reflection is employed to develop a normative account of the moral life of Christians. This course acquaints students with Christian Ethics as a theological discipline and field of study, provides tools to articulate an account of the Christian moral life, and considers the relationship between theology and the practice of ethics in the life of the Church.
Book List            Your Instructor Doctrines of the Second Person
This course will explore biblical, historical and contemporary interpretations of the person and work of Christ.
Book List      Your Instructor
New Testament
This  course is a study of the Gospels, Epistles, and other writings of the New Testament that gives consideration to the their historical, literary, and theological dimensions. After taking this course, students will have gained a general understanding of the major stories and theological ideas of the New Testament, a basic familiarity with the variety of methods scholars use to interpret the New Testament, a basic sense of the origins and historical development of the New Testament, and an appreciation for variation and similarity within interpretations of the New Testament.
Book List Your Instructor
Register for December Courses