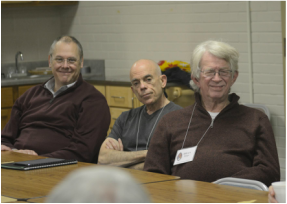 BKSM welcomes all laypersons to take courses with us for personal enrichment or continuing education! We encourage you to experience the remarkable environment of learning, worship and fellowship that makes BKSM such a special place.

February courses begin officially on January 15, when instructors send out the syllabus to students.
The focus weekend takes place February 10-11, and final assignments are due March 12 (if you take the class for credit).

While the weekend begins with breakfast at 7:30 for students on ordination and lay license tracks, course instruction does not begin until 1:00 p.m., which gives you the flexibility of driving to Topeka on Saturday morning, rather than on Friday evening.  If you are taking a class for personal enrichment or continuing education, you are welcome to spend the night at Upton Hall on Friday night, and join us for breakfast and morning prayer on Saturday morning.  While the 8:45 colloquium session is a closed group for students on an ordination track, you are most invited to join us at 10:15 for our praxis session, which addresses some practical area of ministry.

If you would like to audit a course, the tuition is $100. If you would like to take the class for credit, the tuition is $180. The cos﻿﻿﻿t (whether you audit or take for credit) includes ﻿﻿﻿meals and overnight accommodations at Upton Hall on Friday and Saturday night (on a space-available basis).  If you wish to take the class for credit, we encourage you to enroll by January 15. However, if you wish to audit the class, you may register at any time prior to the focus weekend.

Get started by completing the course registration form. If you have specific questions, contact the Very Rev. Dr. Don Compier, BKSM dean, at bksmdean2@gmail.com or (816) 217-4053.

Christian Theology I (D)
This course provides a biblical, historical, and systematic overview of the following Christian concepts: Revelation, the Bible, God, Creation, Humanity and Sin. The goal of this course is to provide students enrolled on the diaconal track (as well as lay students interested in personal enrichment) with a theological foundation for effective ministry in the world today.
Book List              Your Instructor
Christian History II (P)
This course explores Christian history from the later Middle Ages to the late 20th century. Highlights include the wisdom of medieval theology, the Protestant and Catholic reformations, European Christianity encountering new continents and cultures, shock waves of the Enlightenment, and the great age of missionary activity.
Book List Your Instructor
Social Ministry (Saturday class meeting at Trinity, Lawrence)
This course will explore the Biblical, theological, and historical foundations of social ministry in an Episcopal/Anglican context. Participants will also gain a basic understanding of  contemporary issues related to poverty in our communities such as, but not limited to, hunger, education, senior citizens, housing, mental health, refugee resettlement, and other issues which push persons to the margins of society.

Required TextsYour Instructors
Preaching II
For this class, students will be expected to provide two or more previously delivered homilies for the focus weekend. They will also write and present homilies composed during the seminar. Students will need to bring writing materials or electronic word processing for use in the seminar
Book List              Your Instructor
Lutheran Worship
Worship of the Christian assembly is at the heart of the church’s identity and purpose.  It is in worship that we gather together as the people of God, in the presence of God, to hear the gospel, the good news of Christ, be fed with his body, so that we can be sent out to be that body, the body of Christ, in the world.  This class will explore the purpose and importance of worship, as well as the central elements.  We will also explore what makes worship “good” and meaningful, inviting people into a deeper relationship with God and one another so they are empowered to go out and serve the Lord and how we can plan and lead worship in a way that enhances the experience for all.
Required Reading  Your Instructor
Register for February Courses